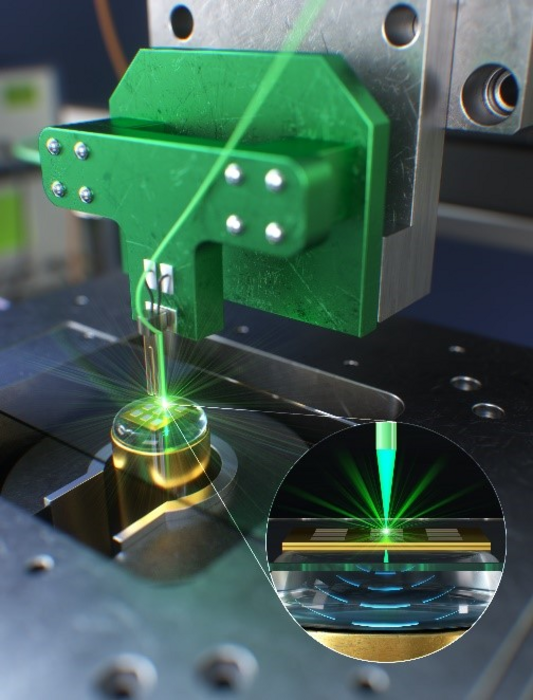 IMAGE: A MICROSCOPE SYSTEM THAT USES OPTICAL FIBERS INSTEAD OF LENSES

Microscopes allow us to explore tiny worlds that are invisible to the naked eye. In particular, photoacoustic microscopy – that uses vibrations generated when light is absorbed – that captures images of cells or blood vessels has been recently developed. This development has increased the possibility of peering inside the body without contrast agents. However, obtaining super-resolution images has been limited due to the difficulty of focusing light into a small, single point with a lens. Recently, a POSTECH research team has opened a new horizon in the development of a super-resolution photoacoustic microscopy system by using fibers instead of lenses.

When using a photoacoustic microscopy, light is usually collected into the lens at a certain distance between the light source and the sample; however, owing to diffraction limitations, collecting light at a single point has been challenging. To overcome this issue, the research team developed a microscopy system that maintains the distance between the light source and the sample in the near-field range (tens of nm) where the diffraction phenomenon does not occur by using a tapered fiber with a diameter of tens of nanometers (nm, 1 nm = 1 billionth of a meter).

As a result of the study, evanescent wave was generated at the end of the optical fiber, and the images of the sample were acquired with a resolution of 1.0 ± 0.3 micrometers (μm, 1 μm = 1 millionth of a meter). This resolution is sufficient for cellular imaging, including red blood cells.

The findings from the study are an achievement that will be the cornerstone for the development of a super-resolution photoacoustic microscopy using optical tapered fibers. It is anticipated to be used as a research instrument to study the fundamental life phenomena that form the basis of various diseases, including cardiovascular disease and cancer.